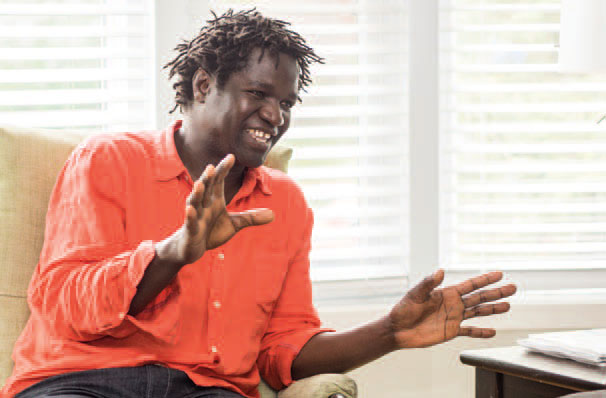 Boucar Diouf was born in Senegal in the region of Sine, where the Serere people live, in a traditional family that raised zebus (cows) and grew peanuts. A youth spent among animals and nature strongly influenced the field of study he chose to pursue. Encouraged by his parents, Boucar studied at the Université Scientifique in Dakar. It is because of these studies that he ended up in Quebec to pursue a doctorate in biology.

How do you transition from the Senegalese sun to the frigid Quebecois winter?

There are many aspects of life we don’t think about when we imagine ourselves moving to a new country. Boucar Diouf explains that before coming to Canada, he took a week-long intensive course on culture shock and adapting to Quebecois culture. However, no one warned him about temperature shock. “I quickly understood when I discovered winter in Quebec in African robes” he explains. This experience influenced his thesis topic, which brought together two of his favourite subjects: animals and the ocean. His thesis was on how fish adapt to the cold.

How does all this influence his show “Magtogoek”?

Boucar Diouf settled in Quebec but he hasn’t forgotten where he is from nor his Senegalese traditions. He is Serere. The Serere people have traditional religious practices and believe in the forces of nature. The tradition that has stayed with him the most is the initiator songs of the Serere people; these songs originate in the founding of the country. He continues this tradition on the banks Magtogoek, better known as the Saint Lawrence River.

This mix of cultures and this return to traditions were a strong influence when he created his show. Magtogoek is the name First Nations gave to the river today known as the Saint Lawrence. First Nations often gave poetic names to places. These names were later changed by European settlers. This show is, therefore, a return to culture for the audience.