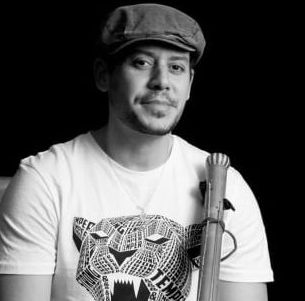 Fethi Nadjem was born in 1983 in Algeria where he grew up in a family of musicians. He began playing the guitar and oud at the age of 13, and developed his skills within the Fine Arts Association in Algiers. He learned Andalusian classical music  becoming accomplished on both violin and mandolin. At age of 21 became one of the founders of a world music fusion band named Djmawi Africa.

The band enjoyed considerable success, enabling them to give concerts on some of the largest stages across the globe. During the 13 years that Fethi Nadjem was with the band he learned to play the kora (african harp). When he arrived in Toronto to begin a new life in Canada, he continued to pursue his musical career, performing with several bands and musicians. Fethi is a member of the Toronto-based World-Fusion style music band, Moskitto Bar and additionally performs with the Arabic-Jazz band Moneka.