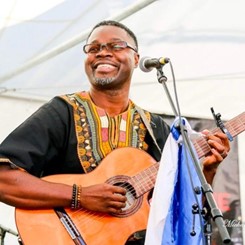 The group’s leader, Dieufaite Charles, better known by his artist name ʺJahfaaʺ, was born in Gonaïves, Haiti. Jahfaa’s unique style is the result of the traditional Haitian musical influence known as “Racine” emphasizing spirituality. Through his music, he became a Haitian ambassador. He learned to play the piano, the flute, the harmonica, then he found his true relationship with the acoustic guitar, which he considers today as his companion on stage. Jahfaa has a soulful voice that inspires and transcends people with captivating energy, with the ability to make them dance. His style of music is an amalgamation of the traditional African root rhythm, R&B, reggae, soul, and the brand new name he brings in his musical charts, African Soul or Zantray Dafrik (in good Creole). also composed the music for the documentary film Real Voodoo based on Haitian culture.